On June 9, Horizn Digital was invited to an influencer gathering event, where the gathering featured Wang Lei, a famous actor from Singapore, as one of the main speakers. The CEO of Horizn Digital, Jarone Choo, was involved as the organizing chairperson of the event.

The atmosphere at Seahorse Restaurant that morning was lively – as the former actor and now an online fish seller from Singapore, Wang Lei – attended the Influencer Engagement Event in Miri, Sarawak. The joint collaboration event, by Miri Influencer Association and SUPP Senadin, was organized with the aim to develop the community by promoting and showing what Miri has to offer.

That day’s lunch menu consists of Miri’s speciality: midin (vegetable meal) and Akasia syrup water as well as a cake from the patisserie department of RiamTec as dessert. Following the remarkable lunchtime, YB Datuk Sebastian Ting gave a speech to welcome Wang Lei and all the other guests attending the event.

After the heartwarming welcome speech, YB Dato’ Sri Lee Kim Shin took the chance to highlight the growing potential of the digital world and the internet in promoting Miri tourism. This includes several tourist attractions such as Borneo Tropical Rainforest Resort and Gua Mulu, as well as the infamous Empurau fish that can only be discovered in Sarawak. He further explained that these attractions are natural Miri gems which cannot be built with money, and they should be shown to the locals and those beyond the Miri community. Therefore, he felt pleased to have Wang Lei invited to share the tips on his online success and guide Miri influencers to follow in his footsteps.

Soon after the inspiring speech, the event star, Wang Lei, revealed the story of how he started creating content on social media. As a former actor and singer, he usually performed acting or singing gigs to gain income. Unfortunately, when the Covid-19 pandemic hit, his usual income flow was restricted completely since his job movement was limited. He explained that he decidedly started singing on Facebook Live with only 200 audiences at first. As this went on consistently, more audiences started coming to watch his live stream. So, when he started selling seafood, he had gathered a large audience from his singing live stream which unexpectedly contribute to the success of the seafood business.

“If you want to sell something, sell it well,” concluded Wang Lei from the story. He further added the 3 things to keep in mind when selling your products. The first one is the quality of your product. Secondly, your after-sales service. Lastly, be consistent.

Listening to Wang Lei’s speech, everyone in the room nodded in agreement. Some of those attending the event include staff members and students from Riam Institute of Technology and Curtin University, reporters, marketing agencies (including Horizn digital team members), and most importantly, the influencers who are doing business, or business owners using social media as their main platform to promote. In many ways, these influencers and business owners are similar to Wang Lei’s path.

The event was wrapped up with a few photo-taking sessions with all attendees. Without a doubt, Wang Lei’s presence that day motivated everyone in the room on their own journeys to achieve their own success stories on the online platforms.

Here are some of the photos captured during the event: 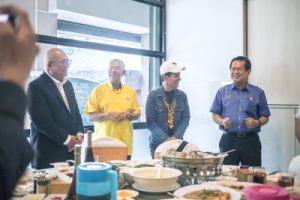