Owen Choo, the Operation Manager in Horizn Digital has been invited to an Alumni Talk at Curtin University Malaysia for soon-to-be graduates students, on 8 September of 2022. Owen and 3 other Alumni Panellists were invited as well to give their valuable insights.  The panel session was led by the Associate Professor of Management of Curtin University, Dr. Lew Tek Yew. Several questions are well prepared for the alumni finalist, and each of them would take turns answering the question given. To start off, the first question was about the challenge they faced upon entering the work industry. Here, Owen began to express his experience in the working industry. “I only graduated from Curtin in last year’s first sem but I have been in the industry for 6 to 7 years now”. He then further explained that the hardest thing about being in the industry, especially in Marketing, was dealing with clients as he has to balance between work and school. 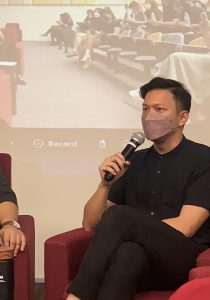 Owen also shared tips and pieces of advice on how to perform well in job interviews. He said that he has some experience in interviewing people, especially Students. He also added that a CV (Curriculum Vitae) is what the interviewer is really looking forward to as it is the first impression of a candidate.  “What I look for in a candidate usually is if they can show me they have experience with solving a problem.”  He continued. Owen also mentions that in the Marketing industry, one needs to have a high level of problem-solving skills because it is needed in order to solve problems for the business owner and clients. It has also become one of the key skills that employers seek in job applicants. 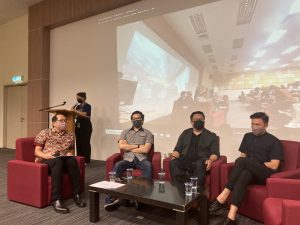 As the session ended, the students who attended physically and those who joined online were given the chance to ask questions as well. One of the questions that I find interesting was about whether it is okay to make mistakes, especially in the work industry. “I will advise you to really look into your company culture,” Owen replied. He also responded and said that in his company, they actually encourage people to make mistakes, but it would also depend on what kind of mistake you’re making. “I actually encourage my team to especially make more creative decisions and innovative decisions,” he added. Owen then continued saying that they are more willing to take risks and also to have unforeseen results. He ended his response by saying that even if it is a mistake at the end of the day, it is a risk that we ourselves are willing to take.  After the end of the whole session,  Owen and all the panellists including the moderator of the panel session, Dr. Lew Tek Yew gathered for the photo session. By the end of the day, Owen has definitely gained new experience and knowledge in his first Alumni Talk in front of hundreds of crowds.

From the Alumni talk, the attendees now have the confidence to face the reality after graduation and learn on how to improve their personal development before stepping into the work industry.