This year’s company retreat was a lit! The main organizers for the retreat were Natasha and Kah Mun who worked closely to plan such a successful retreat. From planning the whole thing, to getting the items ready, up until making sure the retreat itself on the actual day ran smoothly. A big thank you to them for settling everything under their hands, without seeking any help. YOU GUYS ARE THE BEST! We started the retreat with breakfast at our local kopitiam, Chang Man. Everyone enjoyed their food and time there. Afterwards we went back to the office to play some games and have lunch before going to Homestay. Everyone was divided into groups of six to make it a little competitive! The very first game we played was “Scream in silence” which was proposed by Dazzie. All our games were proposed by everyone, the reason we did this was to give each other the sense of participation in planning the retreat. When the game session ended, it was close to lunch time, we prepared everything together and started feasting on Steamboat! Afterwards, we all headed to Tim’s Seaside Homestay and had a blast bonding with each other, playing games. Couldn’t get any better when complemented by the serenity of the coastal city’s great view. When you bring your team to a new location and innovate with activities in an offsite retreat, it allows for employees to not just feel seen and appreciated. It will also encourage them to engage with others on a different level. We reached the homestay around evening time so we began to prepare for our Barbeque night. While some were preparing, some gathered themselves to play some mini games together. To add more sugar to the cake, every one of us got to pick a random present on top of all that fun. Natasha had proposed that everyone should get something from the company after working so hard for the past year. Planning it together with Kahmun, they both decided to pick up several gifts but not all are the bestest ones! The gift ranges from expensive to cheap. Ideally they both thought it would be a total savage to get everyone cheap and crappy gifts but turned out those who received it are what they needed in their life. 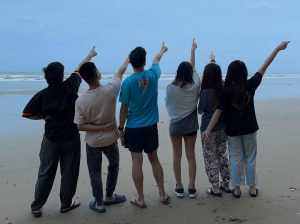 As we experienced in our own company retreat– creating a strong company culture that makes your employees feel positive and productive is becoming a very important part of running organizations. Organizing a team retreat at least once a year is something you should start considering.

Talk about ending the retreat with a bang! #CompanyRetreat2022 🤩
Horizn Company Retreat 2022 is a wrap ^^